The Politics of NASA - What History Has Taught Us 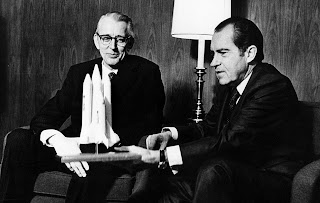 Every political season brings the same old ideas about what government should do and how it should operate. This election brings a decision between operating government like a business and the discipline it requires, or operating it as an entity that transcends the typical rules of budgeting, balancing, and funding for the greater good of the people.  Many have tried over the years to hybrid the two and reinvent government by instilling some sense of discipline to balance revenue and spending. It has rarely worked.  I have always found it fascinating that the candidates who often run on a platform of reforming government are the same one that  have been in office term after term and nothing has changed. This may explain NASA’s predicament.  Since Richard Nixon transformed NASA from a deep-pocketed, goal oriented agency to a limited budget, keep the lights on, do something is better than nothing approach, NASA has struggled to find its way. 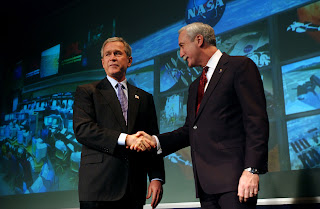 Often a political football, its mission and funding are dangled in front of voters in key states important to the space program.  Over the past forty years, politicians never seem to get it right.  NASA is one of those agencies where politicians wave the flag and point to the achievements of the past while paying lip service to the future. It is no wonder that NASA or the public isn’t clear on a future direction. At any given time, those that control NASA’s funding and those that control NASA’s leadership will give different opinions and answers.  Moon or Mars? NASA built or Commercial Transport?  Robotic or Human Spaceflight?  NASA incurs costs and delays every change in Presidential or Congressional Leadership.  Current plans or work must stop and new plans must be developed only to be changed because they cannot be completed before the next change.
In retrospect, with the constant churn in NASA’s focus what is amazing is that anything could be accomplished at all.  Let’s take a step back and briefly look at what has transpired since Apollo 11. 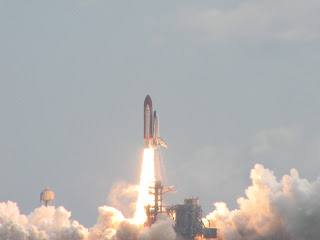 Many argue that NASA has wasted its money over the past decades.  Well, there is an element of truth to that and it is certainly true of any other government agency. Yet no agency has been asked to do so much with so little or asked to change directions so many times. One of the more telling comments about the space program came from the 2009 Augustine Report, it stated:

"the greatest contributor to risk in the space program, both human and financial, is seeking to accomplish extraordinarily difficult tasks with resources inconsistent with the demands of those tasks"

To the general public, human spaceflight is the face of NASA.  When numbers are tossed around that NASA’s budget is sixteen billion a year many assume that it is all for human spaceflight. It is not. Manned space takes a little more than a third of NASA’s operating budget.  Within that budget NASA has to operate the present infrastructure while constantly planning a new one. That takes resources and money.

Those who follow space and the current Presidential candidates lament at the lack of an American launch vehicle. The current Administration can point to former President George Bush as the one who set a date for the end of the Shuttle program. While it could have been extended, a once or twice a year schedule would have been expensive and risky. Retiring the shuttle was probably the right thing to do, but not having a replacement on the drawing board at least a decade ago is inexcusable. However, it was the only option NASA had available given its constraints. The Romney plan calls for reshuffling the current pieces, no increase in funding, and magically it turns out better.  It is true that NASA has lacked a clear mission, but this type of plan should worry every space follower.  The approach that NASA can transform into the world leader in human spaceflight without additional funding shows a fundamental lack of understanding of the problem.  One thing Presidential leadership has shown us with the space program is that NASA is the girl everyone wants to take to out on a date, but never thinks about calling again the morning after. The only way a Romney plan works is if everything else goes. While we focus on human spaceflight, let’s not forget that America is THE undisputed leader in robotic exploration of the solar system.  It’s not even close. I for one am not ready to concede that leadership position.  It cannot be an either or choice. American space leadership requires continued human and robotic exploration. 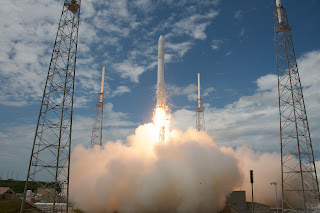 I was a little skeptical at first of the Obama plan for the reliance of commercial vehicles to get American astronauts to low Earth orbit, but it is the right approach.  The important things in human space exploration will take place beyond low Earth orbit so let’s put our resources there and built a heavy lift vehicle and buy seats off the shelf to get us to the things we will build in space.  NASA needs more funding, but the approach needs to be different.  First, we need to recognize and reward NASA for its success. Robotic missions like the Mars Rovers and Cassini are delivering extended value and need to be allocated increased funding rather than be cut to reallocate their dollars.  Second, the way NASA is budgeted doesn’t make sense today. It isn’t run like a typical government agency or a business.  If the Defense Department needs a new fighter it is funded separately as a project. We don’t cut troop strength or mothball a Carrier to fund it.
NASA is unique in its mission, but the approach to managing it is akin to fitting a square peg into a round hole. It doesn’t work, it hasn’t worked and it work won’t no matter how persistent we are at trying to make it work.  Think of it like this, you work in a factory, but the owners say they need to expand and build a new factory to replace the old outdated one.  They can’t afford to do both so they layoff every person at the factory to have the money to build a new one. Does that make sense? Of course not, that’s bad business and the fault of the owners for not planning for capital improvements. The owners would typically set aside capital funding over time to build the new plant without disruption to the business and do it so that the transition was seamless. NASA can’t do that, so it must have the government equivalent of a capital funding plan. What’s happened to NASA is that the government is closing the factory every few years. This is inefficient, wasteful, and the agency loses key intellectual talent and highly complex skills that it must continually rebuild.
The right approach is for the President and Congressional leaders to fund a separate “above and beyond” budget designed specifically for infrastructure and launch platform design. This budget would allow NASA to strategically plan for future launch platforms without having to pick and choose which existing programs to cut.  A billion dollar a year set aside would keep America always on the leading edge of space with top notch resources, facilities and vehicles to maintain our leadership in space.  We need a creative, sustainable and different approach to NASA. In looking at each candidate’s plans, the Nixon curse of focus on expense and not goals still seems to be the norm. What has history taught about support and a vision for NASA?  It is all about timing. The grandest visions of Presidents for NASA and space exploration rarely pan out. Not since 1961 after Kennedy's moon speech have both parties been united on a common NASA goal. Nixon arrived at a point in history of transition and weakness in support for space and his actions have proved the most lasting and damaging. Several President have tried to turn it around, but failed. From Reagan, Bush Sr, and Bush their visions never left the drawing boards of Earth. For this election, given history and the way NASA is funded, it is equally important to find out where your local Congressional leadership and candidates stand on the future of NASA. Turning NASA around and back to being focused on goals won’t happen on NASA’s existing shoestring budget no matter how the pieces are rearranged. The election of 2012 does not feel like a Kennedy or Nixon moment in history where the President, Congress, and the public's support converge to set a bold new course for America in space. Rather, it sounds a lot more like the status quo of the past 43 years, It’s going to take all of us motivating our leaders to support NASA to have a chance of seeing Americans set foot again on another celestial body.