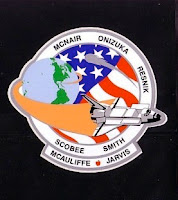 January 28, 2011 marked the 25th anniversary of the Challenger Accident.  For those who were of age to remember that fateful day, it is forever etched as one of those unforgettable moments of our lives. In an instant, the shock and surprise, the tragedy and loss became an event where you never forget where you were when you heard the news. For me, it was no different. Our daughter had been born the day before the accident and having been exhausted from a long two days of events, the morning of the launch I had slept in a little late before heading back to the hospital. I knew that liftoff was scheduled later that morning around 11:30am and I had hoped to make over the hospital on time to catch it live.  If not, I would see it later on the news that evening. As timing would work out, when I got off the elevator on the maternity floor there were several people huddled very close to a television in a corner of the waiting area. So close that it obscured any line of sight I had to what was of such interest. As I walked by I heard the announcer say "it appeared to be a problem with", that was it. It did remotely cross my mind that they were talking about the Shuttle, but I had assumed it was a scrub due to a last minute technical glitch. This particular flight had been repeatedly postponed and that it might have been again was of no surprise to me. I brushed it off and kept walking. An accident of this magnitude was the furthest thing from my mind. We all knew the hazards and risks of spaceflight, but like many others I did not think it was possible for America to lose a Space Shuttle and its crew.

-->Click to continue reading the article
Posted by SpaceMike No comments: