April 12th, Past and Present 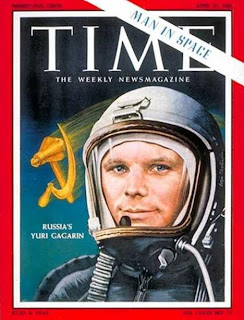 The fiftieth anniversary of humankind’s first venture into space is now upon us.  April 12, 2011 marked five decades of human space exploration.  Significant progress has been made and perhaps more could have been accomplished on our watch in this small window of human history. Persistent political and economic headwinds have slowed our once starry eyed dreams of moon bases and footprints on Mars.  Recently, as the anniversary of Yuri Gargarin’s first flight approached, Russia announced new plans for human exploration of the moon and eventually Mars.  China had previously announced ambitious plans for manned orbiting space stations and eventually their own exploration of the moon. Neither announcement spurred the same passion or national competitiveness in the United States that fueled the first space race.  It’s a story that has played out over and over in the brief history of manned space. Leaders of nations make bold proclamations of venturing beyond Earth orbit to once again touch the surface of other worlds.  What each nation inevitably finds is that during the time it takes to prepare for such a journey, the winds of change shift priorities and make those dreams smaller.  New leaders with new visions, unforeseen economic storms, wars, natural disasters, and other diversions tend to lure a restless public and its government away from dreaming big to the reality of Earth-based problems.
Once, such claims and challenges motivated our nation to dream big, take risks and push the technical edge to its very limit to reach what was thought an unattainable goal. We accomplished the goal of landing on the moon at a startling pace, just eight years after a fallen President’s challenge. However,in the ensuing decades, complacency led to loss, and poorly defined strategies led to delays and waste; all the while managing expenses became the supreme architect of the American Space Program.  A brief eight year period in the early sixties of crystal clear focus and virtually unlimited resources gave way to decades of unfocused misdirection and underfunding.


Fifty years seems so long if measured in “space years”.  We came so far, so fast with so little technology in the first ten years that the last forty feels like very little progress by comparison. The fast paced technical revolution spurred by the space age that put personal computing power, mobile communications and instant access to news and information into everyone’s hands has made the technology used to reach space seem antiquated. The technical marvel that is the Space Shuttle is decades old.  Designed and built in the seventies, it is a long serving testament to how good we were, but how far behind we have fallen. While the Shuttle fleet has been upgraded over its lifetime and given new avionics, it is still a design from another era.


Over the years, economic drivers for the space program had us thinking in a linear way about what defined human spaceflight objectives.  We began to think about successive steps and not concurrent objectives.  Mercury, Gemini, Apollo, Shuttle, Constellation  were names given to each program that would inherit the path to space, but as the “goal based” space program made way for an “expense based” program we no longer had a progressive successor lined up.  Gaps emerged between Apollo and the Shuttle, then the Shuttle and it’s yet to be defined successor (since Constellation was cancelled in lieu of Commercial Spaceflight).  For all the technological risks we took reaching for the moon, the greatest risk would not come from machines, but from our wallets.  The loss of 14 crew members was not because we overreached, but because we tried to do more with less.  Tragedy will forever mar the Shuttle era as lives and opportunity lost.
In terms of human history, fifty years is but a blink of the eye. For some of us, the entire history of spacflight has occurred during our lifetime. Thirty-years ago in April of 1981, the first Space Shuttle was launched to usher in a new era of space transportation. It had all the potential, but none of the backing needed to deliver on its promises. The Space Transportation System (Space Shuttle) had planned for 500 flights in ten years, it managed just 135 over its thirty year life. Forty-one years ago, Apollo 13 was giving NASA its second finest hour after landing on the moon.  Fifty years ago, the Soviets and Americans began their reach for space. One-hundred years ago, humans had yet to stand on the South Pole. In Belfast, the Titanic was being built on the promise that it would become the gold standard of transportation across the Atlantic while routine airline passenger service was still a dream.  Just one-hundred and fifty years ago, the Civil War began. The very fate of our nation rested on surviving the differences within our own borders. Five-hundred and fifty years ago, the first European settlers had yet to touch the shores of America.  Lasting progress comes one step at a time with and starts with a vision of the future.  It progresses rapidly when motivation and economic benefit or national interest intersect. We seem to have lost both in our quest for space.
Posted by SpaceMike