Yesterday, there was the announcement of the 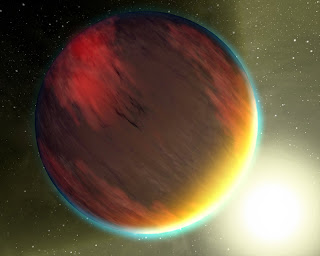 discovery of five large planets orbiting the star HD 10180, 126 light years from Earth with the possibility of two additional smaller planets also in that system. The findings indicate that the planets orbit their star in a pattern that resembles the structure of our own solar system. NASA’s anticipated announcement tomorrow (Thursday, August 26, 2010) will likely add similar findings from Kepler of Earth-like planets orbiting distant stars. That news brings to mind the recent debate that has sprung up regarding whether or not people, or more appropriately governments, should communicate with alien civilizations should we discover them. This has received more attention as of late when Professor Stephen Hawking, the noted physicist, stated that alien civilizations were likely to be older, more advanced, and would likely be hostile. He remarked that alien civilizations would likely raid our planet and use what they find here as spare parts for their own civilization and recommended we avoid communication.

Our detection of exoplanets has advanced rapidly in just a few years, but so far we have yet to discover any form of life in the universe outside of planet Earth. However, in the past decade the case has gotten stronger that some form of microbial life may indeed exist in our own celestial backyard either lurking under the soil of Mars or in the oceans of Europa and Enceladus. If that’s true, life is likely abundant in the universe, but what about this “evil empire” waiting to pick up a signal of intelligent life somewhere and raid an unsuspecting planet? It’s a ridiculous argument fueled by one too many sci-fi movies that portray alien civilizations as ‘pirates’ and ‘barbarians’, or reptilian creatures that are savage, but technologically superior and ready to slay an inferior species and not think twice about it. I could write a book about what’s wrong with this concept. From the size of the planet required to support such as advanced race’s resource demands, the additional gravity and the burden that puts on escaping the planet to the same constraints of physics that we face. It all makes for entertaining reading, but that may be the extent of it.

Hawking’s alarmist comments were likely meant more to create interest and dialogue on the meaning of humanity than to seriously create worry about a conquering alien civilization waiting to destroy the Earth. Step back, take a deep breath and think about this for a minute. First, any civilization brought up in a manner where destruction of other worlds and a lack of respect for other living beings is the primary driver for that civilization couldn’t survive long without destroying itself much less others. Look at our own planet for example. We’re not nearly as advanced as we project these alien civilizations to be and we live under the constant threat of annihilating each other. Second, these ‘aliens’ would build these fantastic ships to cross the universe and haul their ill-gotten booty and for what? Computer chips? A few fighter jets? Earth’s water? The first two would be obsolete to that civilization and the last is abundant in the universe in the form of ice. They could use their technology to send a few comets back home or tow an icy moon back and all of that would likely be closer to their own home planet. So what does that leave us? Just bad tempered aliens out looking to destroy a planet full of living beings for spite? Seems impractical that they would cross the galaxy to wipe us out and do it just because they could. The Jodie Foster line in “Contact” comes to mind; “It would be like us going out of way to destroy some anthill in Africa”. Why bother?

Perhaps we will find that indeed humans are unique in the universe after all, maybe it is our predisposition for violence that sets us apart. We see evil in others, because we are so use to seeing it in ourselves. Maybe the universe doesn’t work that way at all. Just maybe, alien civilizations don’t have the notion of reigning supreme over the weak, of using technology as a means to threaten domination. Perhaps benevolent civilizations will pick up an earthly broadcast of “Star Wars: The Empire Strikes Back” and be fear struck that it a documentary of how we operate, and feel the need to arm themselves against future invaders from Earth. It could be that they might pick up a broadcast of “Star Trek: The Next Generation” and would wait to welcome the altruistic human civilization in the form of Captain Picard and his crew aboard the starship Enterprise as they come visiting on their “continuing mission to seek out new civilizations”. If alien civilizations exist and they were to find Earth or pickup up our decades of broadcast we could understand their apprehension about us or hostility towards us, for any signals they received from us were likely dominated by proof of our preference to use aggression to solve our problems. They may just avoid us altogether.

Though we have not found any evidence of life outside of our own planet, and we have only begun to find Earth-like planets around distant stars, it is mind boggling and an extreme display of hubris that we humans think we’re alone in the universe. We inhabit a small planet around an ordinary star about halfway out from the center of our galaxy with billions of other stars just like it everywhere, and all made from the same materials and processes. We have evidence of oxygen, organic molecules, and water all around us. While a large portion of that water in our own solar system is in the form of ice, it is proof nonetheless that given the right temperature our main criterion for “life as we know it” is abundant. It would be shocking if it turned out that with this abundance of the chemical ingredients for life spread all throughout the vastness of space that the right combination only occurred once in an ordinary galaxy around an ordinary star. What’s more likely is that life is everywhere, from primitive to intelligent, it just happens to be spread so far apart that we can’t detect it or won’t detect for decades, perhaps hundreds of years, if at all.

For all of our fantasy and dreaming of alien worlds, it may be that we will never know. The laws of physics, while not fully understood, may be laws that cannot be broken. Even if we could travel at light speed, it would still take too long to visit distant worlds, too long to effectively communicate. Exceeding the speed of light may be impossible and that may keep us safe from Hawking’s aliens, but also alone. Being alone may come at a price; we could be deprived of the benefits an advanced civilization might bring us. The evidence for why it may stay that way is in the form of a simple experiment. Einstein said the speed of light is a universal speed limit. Here’s how we know. If you were walking down the street at 5 miles per hour and threw a baseball forward at 10 miles per hour, the speed of the ball is actually 15 miles per hour. The speed of light is at its maximum in a vacuum, and less through another medium such as air, but walking down the street with a flashlight shining forward and the total speed of the beam of light is the speed of light. Even though it’s less in air then its maximum, the walking speed didn’t add to it and the speed of light is the same whether you are standing still holding the flashlight or walking with the flashlight. It tends to support the theory that going faster than the speed of light just isn’t possible. The speed of light isn’t the fastest that light can go, it’s the fastest it’s allowed to go, the speed limit imposed on it by the universe in any given set of conditions.

We may indeed find ways to make trips around the solar system faster, but traveling for years at light speed to another star may just be beyond our civilization's reach and that may mean it is beyond an alien civilization’s reach also. For the all the ideas of creating “warp drives” and opening “wormholes” we just may never get there. It has become a near forty year quest to move beyond Earth orbit. I don’t like our odds of getting it together and creating the advanced space technology to move among the stars, but there is hope. In the next 50-100 years the signals of maturing civilizations that may have been on the same evolutionary timeline as Earth may reach us, and maybe it will be from the system orbiting the star HD 10180. We may tune in to see what and how another alien civilization is like by their broadcast, and we may learn something about them and about us, it may give new meaning to the term “educational television”.

As for those hostile aliens, don’t lose sleep over it. In the 126 years or so it may have taken them to get here from some distant star, they would either be too tired to fight us or have long forgotten why they ever wanted to come here in the first place.
Posted by SpaceMike No comments: Links to this post