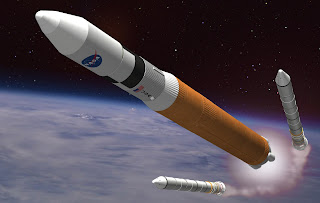 in the middle between the drastic retooling that the Obama Administration had sought and the “stay the course” approach outlined in the Vision for Space Exploration. There are a few things we should never compromise in this country and the exploration of space makes the top five behind life, liberty, the pursuit of happiness, and national defense. I say this because space exploration is one of those things that does not lend itself to compromise very well. Space is difficult, full of unknowns, and when you’re doing something for the first time, incredibly expensive. Getting NASA back on track is turning out to be a lifetime endeavor. By that I mean I’m not sure in my lifetime I’ll ever see it on the right course. Decade after decade the same mistakes and missteps, more compromise that delivers enough to keep the program on life support until we can change strategies yet again. The good news is that we are most likely going to build some things we need, the bad news, there isn’t enough money to do it right or do it in the mandated timeline. That’s just the start of it. This Senate bill is only half the battle. There still needs to be reconciliation with the House version of the same funding authorization. As they stand now, they are both radically different and neither is the optimal solution. It’s getting to the point now where we need to either be in this all the way or out of it and get a thumbs up on whether or not we need to continue manned space or the thumbs down and get out of it and boost unmanned exploration. This continual political infighting ends up costing us more and we get less. If the Senate bill is a compromise and the House bill is radically different then just imagine what we are going to end up with when this is all said and done.

Realistically, we’ve moved very little since Apollo. One could argue we’ve done almost nothing since the moon landings since we appeared ready to abandon the space station and we have already committed retiring the shuttle. We haven’t learned from those projects and built upon them a better future. We’re treating the Shuttle era like that forgettable season on the television series Dallas where Bobby mysteriously reappears after being killed off the previous season and we find out it was just a dream. Just like that we’re being asked to forget that whole Shuttle and ISS program happened and let’s pickup where we left off with Apollo. It’s senseless. We can’t have this both ways. We can’t keep the space program as a trophy in the case while providing minimal funding to keep us in the spotlight. The strategy and funding mistakes of the past have costs us the lives of astronauts and we’ve lost valuable time.

I think it was Dave Scott, Commander of Apollo 15 that said we shouldn’t be so worried about the program, that explorations of great discovery have sometimes had hundreds of years between them. The difference then and now was the evolution of technical capabilities, not a will or commitment to explore. It was because those predecessors never lost that will to explore that we have a space program, but now it’s different. We’re willing to do only what we think we can afford. This cycle has to be broken. We need to once and for all decide what we’re going to do, how we’re going to do it, and when we’re going to do it. Once we agree on that, then it will cost what it will cost to achieve. Somehow, this mindset has creeped into the Congress and the President that NASA willingly makes things more expensive just to waste taxpayer’s money. The solution then becomes dictating a spending ceiling and a timeline that fixes NASA’s problem. It doesn’t work that way. This logic escapes me. I challenge any member of Congress to tell me a real world example of where that works. Where do we dictate broad specifications on something extremely complicated and provide funding and a timeline as if every detail was known? What inevitably happens is that it costs more and takes longer because we didn’t do it right up front. Everyone’s angry and the course changes and funding restrictions only get more frequent. I don’t know that I care if we spend less and it takes longer if it’s the right course. It’s where we spend less and compress the timeframe, or compromise the strategy and don’t get what we need just get something that disappoints me the most. We’ve got lots to do in the area of space exploration. There are so many exciting destinations for humans and unmanned spacecraft. I realize we can’t do it all right now, but we need an integrated approach independent of costs. Once we have that, we can decide how we will pay for it and how long it will take. The way we’re doing it now we will never make any real progress.
Posted by SpaceMike

Amiable post and this enter helped me alot in my college assignement. Thanks you as your information.